FAN ascended on the beautiful BlueBriar Park hosted by the City of Granite Shoals TX Saturday June 1st with anglers ready to make a statement on the 45th scheduled event of the 2013 season.

After the dust had settled the team of Jason Buchanan and Terry Kircus would take the lead by .06 pounds ahead of Jesse Fry and Josh Wallace. 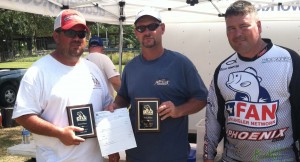 Big Bass of the  day come from the team of  Lance Hale and bill Kimberly at 7.11 pounds

Finishing out the top 6 paying spots1